How The Food Industry Has Hoodwinked You

How The Food Industry Has Hoodwinked You

Feeling that craving for a cheesy pizza?  How about chocolate – do you find that this ‘calls’ to you if it is anywhere in the house (‘hello?  Come eat me please!’).  And don’t get me started on that rainy day/hot chips combo!

Whilst we may have the best of intentions when it comes to improving our eating habits, food cravings can be tricky to move past.  Willpower may work for a few days, but eventually it runs out…leaving us feeling like a failure when we cave in to that overwhelming desire for a bit of junk NOW.

The thing is – it’s not actually your fault.  You’ve been hoodwinked by a very clever strategy that has used your own biology against you.  But while it may be powerful…so is knowledge.

The ‘Bliss Point’ – How Your Brain Gets A Kick

As human beings, we have evolved through times of feast and times of famine.  It was the norm for our ancestors to have to weather long periods where food was scarce, as well as periods of time when the harvest or hunt was successful and food was in abundance.  As a survival mechanism, our predecessor’s bodies had to be prepared for both scenarios – when there was plenty of food around, they would eat more and store the extra away to compensate for times when food was scarce.  When leaner times would inevitably arrive, their bodies were able to dip into their fat stores and get by and survive.

From the point of view of survival of the human race, this was a great system that worked very well, and we are here precisely because of it.  However, in the modern day and age it’s proving to be not so great for us – and here’s why.

Within our brains are circuits that are motivated to seek out foods that are high in certain nutrients that packed a lot of ‘bang for their buck’.  Foods high in fat or those that gram for gram provided a lot of energy, just made more sense from an evolutionary point to eat.  Preferentially choosing these foods over those with less fat or energy could literally mean the difference between survival and starvation.  In other words, it became highly worthwhile for the human body to provide a reward system to encourage our ancestors to seek these out over less valuable food source.

So here’s where dopamine comes in.  Dopamine is a brain chemical (known as a neurotransmitter) that is released within the brain that makes you feel good – and then encourages you to do more of that thing that made you feel good.  It’s kind of like currency for your brain’s reward centre.  When someone ‘likes’ your photo on Facebook – you get a little dopamine buzz.  If you win on your lotto ticket – dopamine kicks in and you feel great.  When you have sex – you guessed it – dopamine.  And when you eat something that tastes good, dopamine is right there with you enjoying your meal.

In other words, we want dopamine in our lives.  It is our friend - helping us to feel nice, enjoy life and stay motivated.  But in some ways it has also become a liability, now that we no longer have the threat of starvation hanging over our heads.

When we eat, receptors in our mouth and digestive tract are stimulated, and send signals, via the vagus nerve (a fascinating part of the body, but a topic for another day) to the brain.  This message says something along the lines of ‘hooray, food has arrived!  I’m so excited!!’  (I, too, celebrate the arrival of food in this way).  The thing is – the richer the food, the more dopamine is released.  And as I mentioned earlier – the more dopamine is released, the stronger the reinforcement to repeat the activity in order to earn another dopamine hit.  Science has shown that the combination of foods that trigger this reward behaviour is the pairing of carbohydrates (eg sugar, flour, potato) and fat.  This is what is called the ‘bliss point’ – that moment when you take that first bite of chocolate and your brain starts clanging ‘DING DING DING – we have a WINNER!’  Interestingly, to eat carbohydrates OR fat on their own doesn’t trigger this over-exaggerated response.

It is interesting to note that studies have shown people who struggle with their weight tend to experience a stronger reward activation to foods that are high in fat or sugar, than people who are naturally more lean.  From an evolutionary standpoint, this was an advantage.  if you have found it easier to gain weight than other people, it’s highly likely your ancestors survived when their peers didn’t – meaning that it really is a wonderfully happy miracle that you are here!

Your Loss, Their Gain

So unfortunately, whilst this may be news to you, you can be assured that food manufacturing companies know all about this.  In fact, they count on it, to make sure that their food is the most appealing, the most addictive, and that it will be highly likely you’ll return for more at some stage.  They actively devote significant resources into finding the exact combination of ingredients that will trigger the most sales.

They also know that foods containing this combination of carbohydrates and fat have a relatively long shelf-life.  Add some fancy packaging that catches your eye, and you’ve got a winning strategy for an almost unlimited customer base (that comes back for more) and a licence to print money.

How To Hack The System

First of all, I believe knowledge is a big part of the solution.  Now that you understand more about how your brain responds to these foods, and how the game has been stacked against you, you will be in a position to notice more about your reaction to certain foods.  You can banish the guilt, because it’s not that you lack willpower in the face of temptation. If you find these foods difficult to resist, you can keep in mind that it is a throwback from your predecessors time.  Instead of beating yourself up, acknowledge that your brain is looking out for your survival (‘thank you, brain!’).  It just hasn’t caught up with the modern era yet, and needs you to step in.

One of the best ways to outsmart the system is to change the types of foods we choose on a regular basis.  For instance, eating more protein has shown to be beneficial for reducing hunger and cravings, and improving the sensation of feeling satisfied with our food.  In addition, we get a bit of a metabolic ‘kick’ from eating protein – it actually requires an extra processing step for our body to turn it into energy.  This is known as the ‘thermogenic effect of protein’ if you want to Google it.   There is also a theory that our bodies prioritise the intake of protein over all other nutrients – meaning that food cravings may be triggered as a way of ensuring you get enough protein throughout the day, and it will keep driving cravings until you have hit this level.  Great sources of protein include lean meats, fish, poultry, nuts & seeds, eggs, or vegetarian proteins like legumes (beans, peas, lentils), and it is a good idea to include at least one of these with each meal.

Eating mostly fresh, unprocessed foods also helps us to avoid that massive, overblown dopamine hit.  Don’t get me wrong – this doesn’t mean we can’t enjoy our food – quite the opposite!  We are far more likely to feel satisfied and balanced if we are eating wholefoods most of the time.  That signal that is flowing from our digestive tract to our brain also indicates the nutrient content of the food coming in – and when our food is fresh and full of vitamins, minerals and antioxidants it is far more likely to help you feel fuller for longer by adjusting your appetite signals to a reasonable level.

Stress, lack of sleep and gut health can also play a role in our appetite and influence our drive to seek out unhealthy foods for that dopamine boost.

The good news is that our Metabolic Balance program is a great way to outsmart the food industry that may have been holding you hostage until this day.

The program makes eating healthy easy, by focusing on fresh, whole, unprocessed foods and a sensible balance of protein, vegetables and healthy carbohydrates to keep your energy levels up.  The majority of our clients who suffer from cravings before embarking on the program find that these disappear – often within the first week – and this certainly makes nourishing your body a whole lot easier!   Our participants learn how to enjoy a sense of balance with their food – and the goal of knowing how to introduce ‘sometimes’ foods without derailing their progress.

How Food Impacts Your Hormones

How Food Impacts Your Hormones

Why Vitamin D Should Be Your New Best Friend

Feeling like your metabolism stopped working about a decade ago?

But you are in luck - we've put together our very best tips for kick-starting your metabolism again! 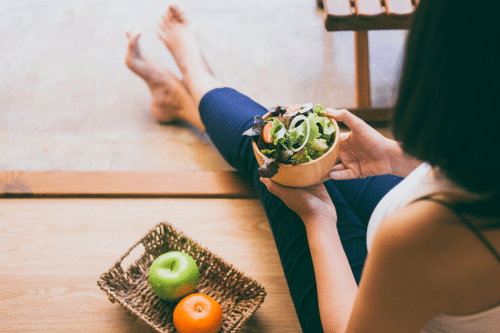