Omega 3’s fatty acids have a vital role to play in our bodies.

These are what is known as ‘essential fatty acids’ meaning that we need to obtain them from our food.  The most well-known Omega-3’s have the tongue-twisting names of eicosapentaenoic acid (EPA) and docosahexaenoic acid (DHA).  These are predominantly found in oily fish – which is thought to provide an answer as to why certain populations such as the Eskimos and the Japanese (who tend to have a high fish intake and high levels of Omega 3’s in their body) tend to have lower rates of chronic diseases such as heart disease.  Unfortunately, here in Australia 4 out of 5 do not get enough Omega’-3’s either through eating fish or via supplementation.  We average around 4-6% Omega 3’s, far short of the target of 8-12% that has been associated with better overall health.

Studies have shown that Omega-3’s are good for our bodies, by:

– Helping us form healthy cell membranes – which we need for our cells to work effectively to maintain fluid balance and allow beneficial compounds such as oxygen and nutrients into the cells, and wastes out.

– Being good for our heart and blood vessels, including playing a role in cholesterol levels and blood pressure.  People with higher Omega-3 levels have been shown to have lower risk of heart disease.

– Contributing to healthier brain function (right from the time we are a fetus through to maintaining cognitive function in our older years) and mental health.  Higher Omega-3’s have also been shown to have a beneficial effect on depression, bipolar disorder and ADHD.

– Playing a role in maintaining eye health – having higher levels of omega-3’s has been shown to be related to better vision development and a lower rate of macular degeneration.

– Helping to reduce pain and inflammation in the body – and as such can be invaluable for supportive treatment of health conditions such as arthritis, allergies, eczema and period pain.

– Slowing the ageing process, and people with higher Omega-3 levels have a higher life expectancy than those with low levels.

So it goes without saying that we want to make sure that we are getting enough of these beneficial nutrients.  However, how do you know if your intake is correct, and whether it is actually providing a benefit to your body?

Now we can quickly and economically test your body’s levels of Omega 3’s, with the Omega 3 Index Test.

This test has just become available to practitioners such as myself and I am really excited about the potential for this test to provide us with an invaluable insight into how your omega 3 levels may be playing a role in your health (or lack thereof).   The test can be performed easily at the clinic as an optional extra during an Initial or Follow-Up Appointment.

– Your body’s level of Omega 3’s that are forming part of your red blood cell membranes – and because our red blood cells live for around 120 days, this provides us with an accurate insight into your intake over the past 4-6 months.  This also gives us an established baseline from which we can calculate the optimal dose of Omega 3’s for your particular needs.

– Levels of unhealthy trans fats, such as those found in biscuits, cakes, pastries, fried foods and margarine.  These can damage your cell membranes and contribute to poor health and an increased risk of cardiovascular issues.

– The ratio of Omega-6 to Omega-3 (which can play a role in driving many common health conditions if it is out of whack). 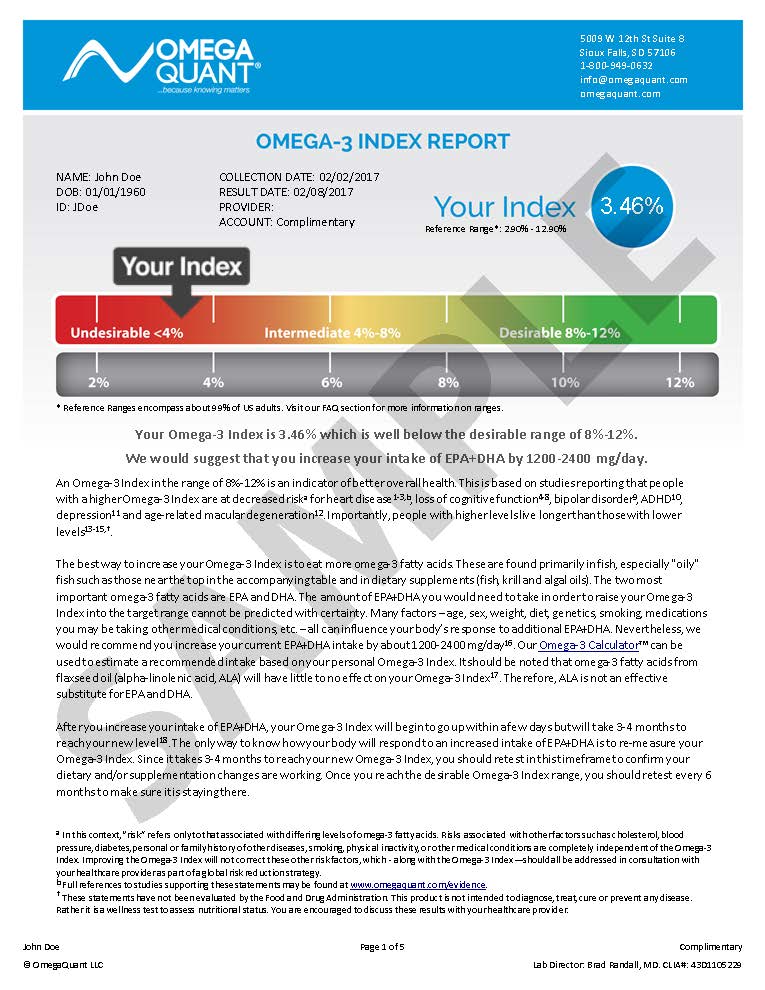 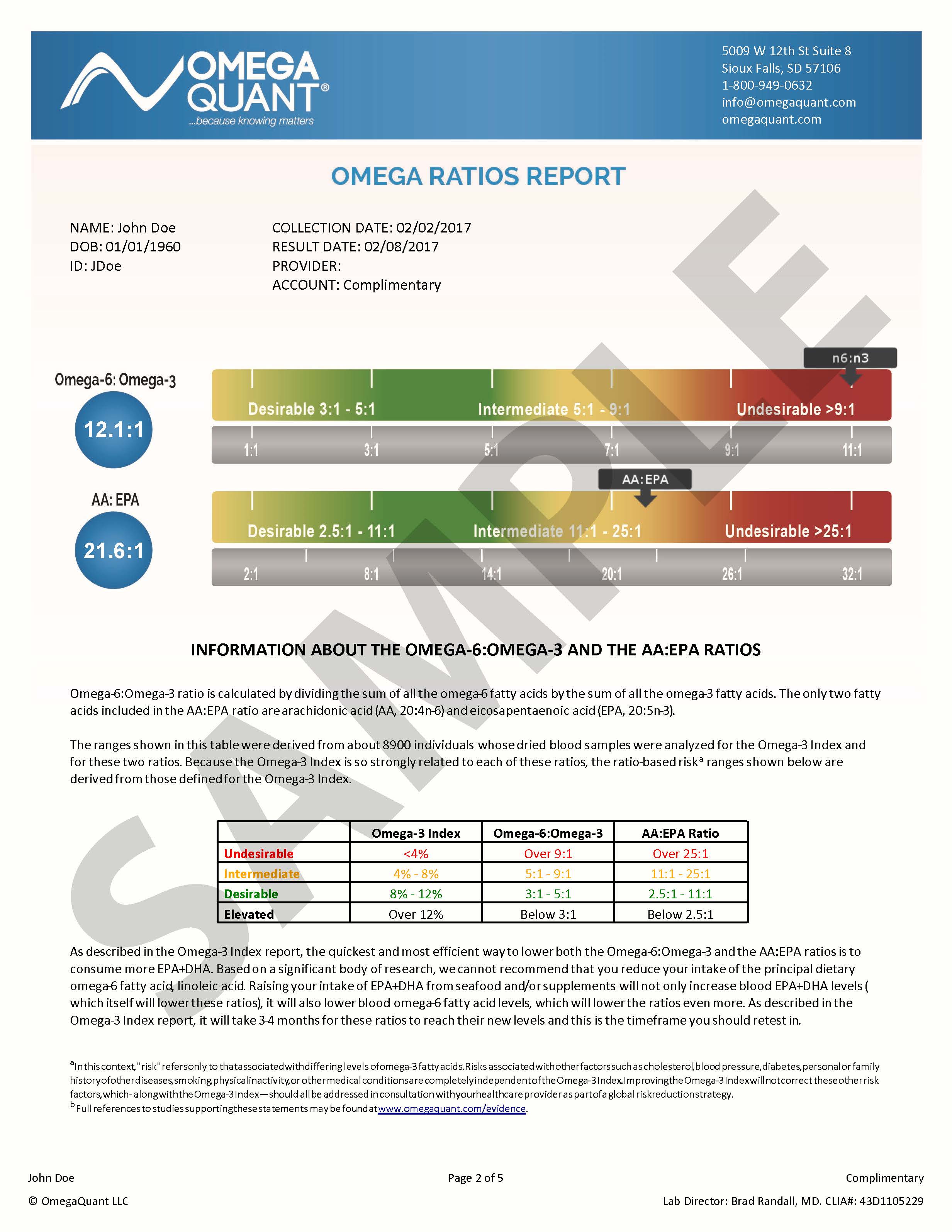 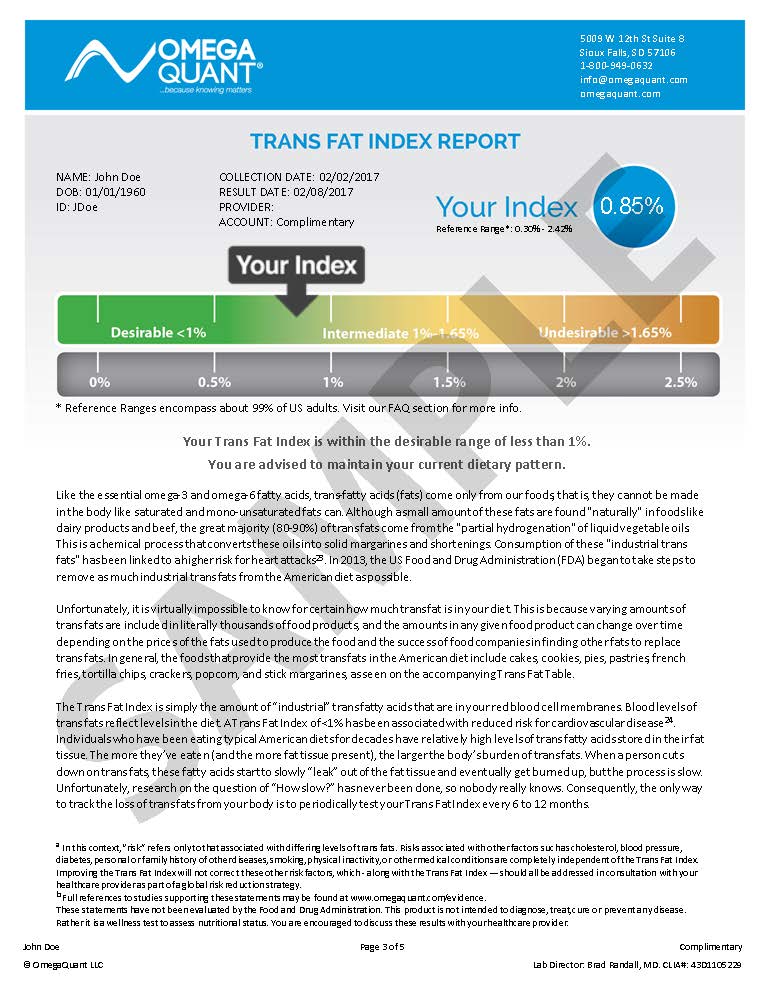 Are you interested in finding out more about your unique Omega-3 needs?

The test is great value and includes your report plus therapeutic guidelines personalized to your results. 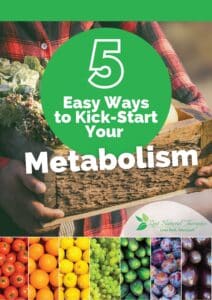